Today’s post was inspired by Louise Walters, author of Mrs. Sinclair’s Suitcase (2014) and A Life Between Us (March 2017). Louise was my mentor through the Womentoring Project – which, if you are a new writer struggling to get your book published, you should definitely apply for. Louise was instrumental in guiding me through a revision of my novel, FRIENDS AND OTHER LIARS; the new draft that came forth from her feedback is what landed me my agent!

Earlier this month, Louise posted her 2016 Reading Roundup and I thought – what a cool idea!  So I’m ripping her off ;-).

I have to admit I spent A LOT of time on Goodreads trying to fill in something for every single square. I actually managed to do most of it except for A book written by someone under thirty, the first book by a favorite author, and a book with the number in the title. But after a thorough evaluation (seriously, I probably put way too much thought into this), I decided to report on the column I X’ed out above. So here goes: 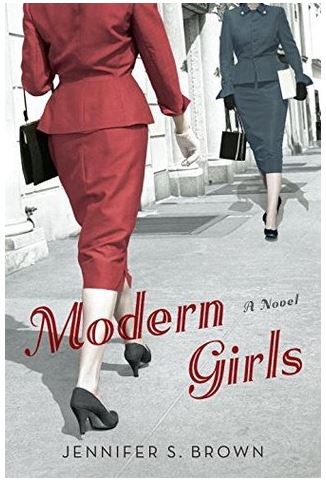 How was it that out of all the girls in the office, I was the one to find myself in this situation? This didn’t happen to nice Jewish girls.

In 1935, Dottie Krasinsky is the epitome of the modern girl. A bookkeeper in Midtown Manhattan, Dottie steals kisses from her steady beau, meets her girlfriends for drinks, and eyes the latest fashions. Yet at heart, she is a dutiful daughter, living with her Yiddish-speaking parents on the Lower East Side. So when, after a single careless night, she finds herself in a family way by a charismatic but unsuitable man, she is desperate: unwed, unsure, and running out of options.

After the birth of five children—and twenty years as a housewife—Dottie’s immigrant mother, Rose, is itching to return to the social activism she embraced as a young woman. With strikes and breadlines at home and National Socialism rising in Europe, there is much more important work to do than cooking and cleaning. So when she realizes that she, too, is pregnant, she struggles to reconcile her longings with her faith.

As mother and daughter wrestle with unthinkable choices, they are forced to confront their beliefs, the changing world, and the fact that their lives will never again be the same….

Right around the time I signed with my agent back in January, I stumbled across The Debutante Ball, a blog by five debut authors in their debut year, (the “cast” rotates every year). At the time, Jennifer S. Brown was on the roster, and the more she talked about her Modern Girls, the more excited I became to read it. The trouble was, I had made this little deal with myself to get through my To Be Read pile before I could buy any more books. But when I was on my vacation at the Jersey Shore I accidentally didn’t pack enough books. 😉 I was not disappointed. Months after finishing it, I still find myself wondering what became of Rose and Dottie, thinking in Yiddish phrases that I am probably woefully misusing, and feverishly anticipating Brown’s next book.

A Book by a Female Author – Tell the Wolves I’m Home, by Carol Rifka Brunt 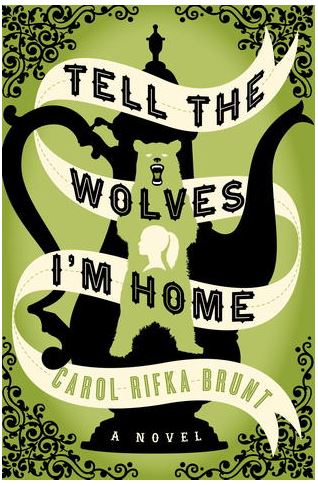 1987. There’s only one person who has ever truly understood fourteen-year-old June Elbus, and that’s her uncle, the renowned painter Finn Weiss. Shy at school and distant from her older sister, June can only be herself in Finn’s company; he is her godfather, confidant, and best friend. So when he dies, far too young, of a mysterious illness her mother can barely speak about, June’s world is turned upside down. But Finn’s death brings a surprise acquaintance into June’s life—someone who will help her to heal, and to question what she thinks she knows about Finn, her family, and even her own heart.

At Finn’s funeral, June notices a strange man lingering just beyond the crowd. A few days later, she receives a package in the mail. Inside is a beautiful teapot she recognizes from Finn’s apartment, and a note from Toby, the stranger, asking for an opportunity to meet. As the two begin to spend time together, June realizes she’s not the only one who misses Finn, and if she can bring herself to trust this unexpected friend, he just might be the one she needs the most.

An emotionally charged coming-of-age novel, Tell the Wolves I’m Home is a tender story of love lost and found, an unforgettable portrait of the way compassion can make us whole again.

This was a book club selection, and it haunted me for days after finishing it. I was touched by the relationship June had with her uncle and the one she developed with Finn. At a time when HIV and AIDS were so tragically misunderstood, it is a tale of forgiveness and real, unconditional love. And despite the heavy subject matter, I found myself flying through the pages as if it were a beach read.

A Book Set on a Different Continent – Beautiful Ruins, by Jess Walter 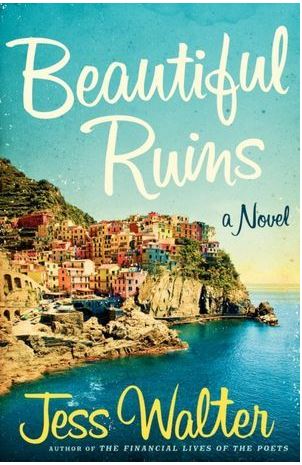 The story begins in 1962. On a rocky patch of the sun-drenched Italian coastline, a young innkeeper, chest-deep in daydreams, looks out over the incandescent waters of the Ligurian Sea and spies an apparition: a tall, thin woman, a vision in white, approaching him on a boat. She is an actress, he soon learns, an American starlet, and she is dying.

And the story begins again today, half a world away, when an elderly Italian man shows up on a movie studio’s back lot—searching for the mysterious woman he last saw at his hotel decades earlier.

What unfolds is a dazzling, yet deeply human, roller coaster of a novel, spanning fifty years and nearly as many lives. From the lavish set of Cleopatra to the shabby revelry of the Edinburgh Fringe Festival, Walter introduces us to the tangled lives of a dozen unforgettable characters: the starstruck Italian innkeeper and his long-lost love; the heroically preserved producer who once brought them together and his idealistic young assistant; the army veteran turned fledgling novelist and the rakish Richard Burton himself, whose appetites set the whole story in motion—along with the husbands and wives, lovers and dreamers, superstars and losers, who populate their world in the decades that follow.

My Take:
This was another book club selection I thoroughly enjoyed. There were parts that I actually laughed out loud, (very hard to accomplish with the written word, IMHO. Possibly more so than causing tears.) and it felt light and airy and refreshing. I struggled to understand if the connection between Pasquale and Dee Moray was two-sided or one (had a disagreement with a fellow book club member on that one), and I have to admit a little bitterness at it being touted as a “literary masterpiece,” knowing that if a woman had written it, it would have been dismissed as “chick lit” or “a beach read.” But I enjoyed most of the different perspectives and the ease in which Walters carried me through the story, which spanned several decades without reading too historical fiction.
Oh, and I might have cheated a little bit on this one because the whole book didn’t take place in Italy, but I wanted to write about it so there.

A Book Based on a True Story – The Glass Castle, by Jeannette Wells

Jeannette Walls grew up with parents whose ideals and stubborn nonconformity were both their curse and their salvation. Rex and Rose Mary Walls had four children. In the beginning, they lived like nomads, moving among Southwest desert towns, camping in the mountains. Rex was a charismatic, brilliant man who, when sober, captured his children’s imagination, teaching them physics, geology, and above all, how to embrace life fearlessly. Rose Mary, who painted and wrote and couldn’t stand the responsibility of providing for her family, called herself an “excitement addict.” Cooking a meal that would be consumed in fifteen minutes had no appeal when she could make a painting that might last forever.

Later, when the money ran out, or the romance of the wandering life faded, the Walls retreated to the dismal West Virginia mining town — and the family — Rex Walls had done everything he could to escape. He drank. He stole the grocery money and disappeared for days. As the dysfunction of the family escalated, Jeannette and her brother and sisters had to fend for themselves, supporting one another as they weathered their parents’ betrayals and, finally, found the resources and will to leave home.

Oh my God I am obsessed with this book. I was hesitant to read it because it sounds pretty depressing, but I’m so glad I gave it a try. It’s now one of my favorite books, and certainly my favorite memoir. The way Walls was able to write objectively and even affectionately about parents who were quirky and questionable at best, neglectful and abusive at worst, was completely astonishing. It is poignant, addictive, sometimes funny and always profoundly honest.

The Second Book in a Series – Gump & Co, by Winston Groom 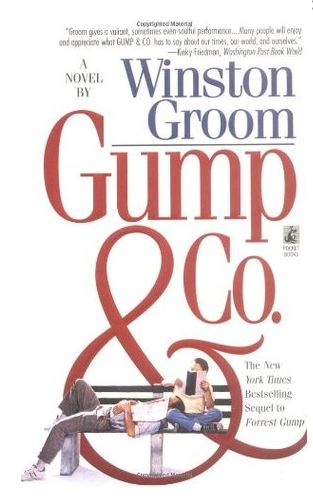 A little older, and wiser in his unique way, Forrest is still running — this time straight into the age of greed and instant gratification known as the 1980s.”Whenever I really get stumped, I go visit Jenny’s grave. She tells me she’s always rooting for me.” The Bubba Gump Shrimp Co. has gone bust and now Forrest is flat broke, sweeping floors in a New Orleans strip joint, when a fresh opportunity to play championship football puts him back in the limelight — and in the money. But fate turns fickle again, and he’s soon out on the road selling phony encyclopedias and trying to raise his son, little Forrest, who needs his father more than ever. Forrest’s remarkable, touching, and utterly comic odyssey has just begun: in store for him is an explosive attempt at hog farming; his own dubious recipe for adding life to New Coke; an encounter with Oliver North of the Iran-Contra affair; and a chance yet again to unwittingly twist the nose of history.

I don’t know if this really counts because it’s a sequel and no books came after it, but nothing else qualified so I’m running with it. The best thing I can say about this book is that I was able to read it in a couple hours. I remember reading that Winston Groom hated the film adaptation, and I can see why. There are a LOT of differences, the major one being that Forrest himself was made to be much less mature and much more innocent than the character in this book. But unfortunately, I had the movie in mind as I read both books, and felt that the movie told a better story. (Sorry Winston Groom). This second book took the whole “what a crazy coincidence that Forrest was not only there but actually caused this iconic moment in history” to such an extreme I actually cringed several times.