When I Knew I Wanted to Be a Writer
I decided I wanted to be an author when I was 23, sitting in front of a waterfall in the Northern Territory of Australia. I guess you could call it the first true meditative moment of my life, or at least the first which sparked an epiphany as monumental as what I wanted to do with the rest of my life. I was on the third and final day of a tour of Kakadu National Park outside of Darwin, somewhere in the middle of my four months of backpacking around the country on my own, and it wasn’t until this moment that I knew why I was even on the trip in the first place.The trip started out as an escape from my first job after college, a marketing job which I hated but didn’t know why. The job was exactly what my education had prepared me for, and yet I found myself dreading going to work every day–not in the normal “I wish I could stay in my sweatpants and catch up on DVR” kind of way, but in the “I’m close to a nervous breakdown” kind of way. At first I thought it was the way the company was run, or perhaps it was agency work in general, but something in me must have known it was something larger than that, because I didn’t just look for a new job with higher pay or less stress or better benefits. I quit and took off to Australia.

Trust me, this sounds way more impressive now (even to me) than it felt back then. Because back then I was running. Running away from figuring it all out. Running for my life.

Back to the waterfall. As I mentioned it was the third day of the tour, and it was the last stop before we bushwalked the 800 meters back to the 4WD vehicle, packed into the tailbone numbing confines of the bench seats, and drove back to a hostel where I could take my first hot shower in over 72 hours. It was the second tour I’d been on in two weeks, and I was exhausted. This tour in particular involved an encounter with a spider so large I’m not prepared to talk about it, it involved a sunburn to go down in history, pushing a fallen tree roughly the size of a sequoia off a flooded road so we could reach our destination, holding a wild python our tour guide rescued from another flooded road, and miles and miles of hiking in the wet season of an area in Australia as close to the equator as I ever need to get. The waterfalls made it worth it. So did the company.

But as the rest of the tour group was about to climb up the final mountain for a little cliff jumping (something that would normally be right up my alley), I found myself too tired to join them. I was physically beat, yes, after all I’ve mentioned above, but it was more than that. My very soul was tired. I was in my third month of meeting new people every day, putting my best foot forward every day, explaining who I was and where I was from every day on a shallow level while trying to figure that out myself on a far more personal level. I longed for a few moments of solitude after the constant chatter and movement of the last weeks.

We were at a low waterfall that seemed to be begging for me to stay a little longer, to pay it a little attention, so I told the tour guide I was going to stay behind. They had to come down the same path they were climbing, so he agreed. I believe his exact words were “Too easy, mate.” 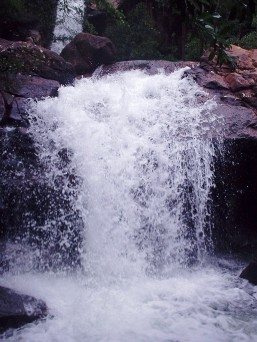 I sat and stared, the pounding water drowning out the static that plagued me on those long, lonely bus and train rides and in the toddler sized bottom bunks of hostel rooms while I cursed my snoring roommates. What am I doing here? Who am I? What does life want from me? It wasn’t until this moment, when I finally set the questions aside and simply watched as the water violently crashed into the lagoon, that the answers finally came. The gratitude came first, for getting to sit and experience it. The waterfall, the tour, the trip. Life. And then a thought came to me out of nowhere. “You should write about it.” And I knew that didn’t mean in the leather bound journal I was already obsessively scribbling in daily, or in a blog, which I did anyway a few years later. It meant books. I should write books. I needed to write books.It wasn’t a completely shocking thought. I’ve been a strong writer since I was little, and always talked about writing children’s books that my more artistic sister could illustrate. But I never really thought about it seriously. At different times in my life I wanted to be a teacher, a librarian, an actress, and an event planner. Writing was always going to be something I did, but not professionally. Until this moment. Something about it felt like coming home. It was the most certain I’d ever been about anything.

Don’t get me wrong, I’ve doubted my ability to become a novelist. Many times. Many many times. Almost ten years after that moment at the waterfall, I am looking for an agent for my second book and busy sketching out an idea for a third one. (My first one, which was based on my travels in Australia, was unable to find an agent to love and nurture it into publishing, but that’s a story for another post). I’m not published, but I’m at the point where I can add “yet” to the end of that sentence and actually believe it. I know I will be published. I know because I can’t NOT write. It’s the thing I do that makes me feel special, connected, plugged in. And I can’t give up on that dream, no matter how many times I get rejected. And when you know something that deeply, it’s not a question of if, it’s a question of when.

And that’s what this website is about – the pursuit of a dream that is statistically improbable. The journey to becoming a published author. If you like, follow along with me as I pursue this crazy dream!