Last Sunday I was walking my dog through the woods when a tree caught my eye. I’m not sure why this particular tree caught my eye that morning of all mornings. I’ve walked the same wooded trail almost every Sunday since we moved into our house three years ago and I’d never noticed it before. But this time, for whatever reason, my eyes picked out a tree with a vine growing up its trunk all the way to the tippy top of the tree, at least twenty feet into the air. I’d never seen anything like it before. It literally stopped me in my tracks. 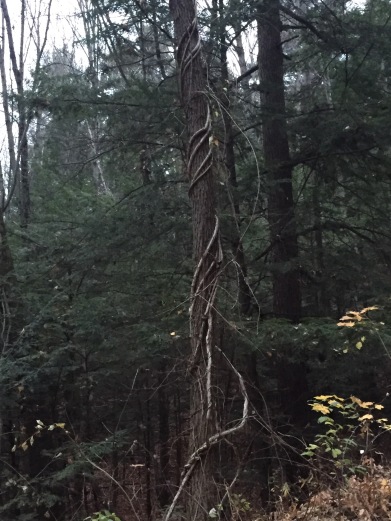 Lately I’ve been wondering about this path I’m on, this journey to becoming a published writer. It’s not for the faint of heart, friends. I’ve been wondering if this is truly what I’m meant to be doing, if perhaps I should be pursuing other career paths that I don’t have time to pursue because of my singular focus on the writing of novels that only a handful of friends and writer colleagues have read. This contemplation, of course, comes on the heels of a few rejections and the anticipation of more. It doesn’t get easier hearing that someone doesn’t feel as passionate about your work as you do. It just doesn’t.

I’m not a religious person, but I do believe there are bigger forces at work in our lives. I would not presume to know the rules and processes of said forces, but I figured asking them for what I need can’t hurt. So I asked. Not for an agent, or a six-figure advance, or even some groundbreaking idea for my next book. I admit, I have asked for these things in the past. But this time I asked (very politely, as one thing I’m learning from Ms. Elizabeth Gilbert in her book Big Magic is that you must be very polite when communicating with cosmic forces) for a sign. A definitive sign to answer my question.

Should I be doing this, or should I let go of this dream?

It hit me when I looked at this vine, entwined so intricately around the tree’s trunk. That vine took months or maybe even years, chipping away at the space left to cover millimeter by millimeter. It can’t have been easy. It had gravity working against it, there must have been some cold and rainy days. But, being a vine, it never stopped. It doesn’t have the capacity to take a day off from its slow climb. It just kept moving, onward an upward, without any regard for the fact that as many people pass by it very few would stop to notice it. It expended all its effort with reckless abandon into growing and reaching and climbing until it fulfilled its ultimate purpose.

Like the vine, I don’t have a choice. I could no sooner give up on writing than the vine could give up its pursuit of the top of tree. It’s been years since I’ve taken more than a week off from writing. Not because I come delightfully to my keyboard each day. In fact, every time I sit down to write I suddenly think of fourteen other things I could be doing that don’t involve the sheer terror that awakens when I sit down to a blank page. It’s because, much like exercising, it simply must be done. Because if I don’t I’ll go (not so) quietly mad. And because it feels so good when I’m done.

I could choose to stop pursuing publishing, true. I could keep my literary babies safely tucked into their bassinets rather than exposing them to a world of rejection. But I can’t stop making those literary babies. Like the vine, I don’t have a choice. I write or I go insane. I climb or I die.

One could argue that I read way too much into a little insignificant vine, that I was seeing what I wanted to see. But really, what is a sign if not something that shows you what’s already in your heart?

Back to the book now.